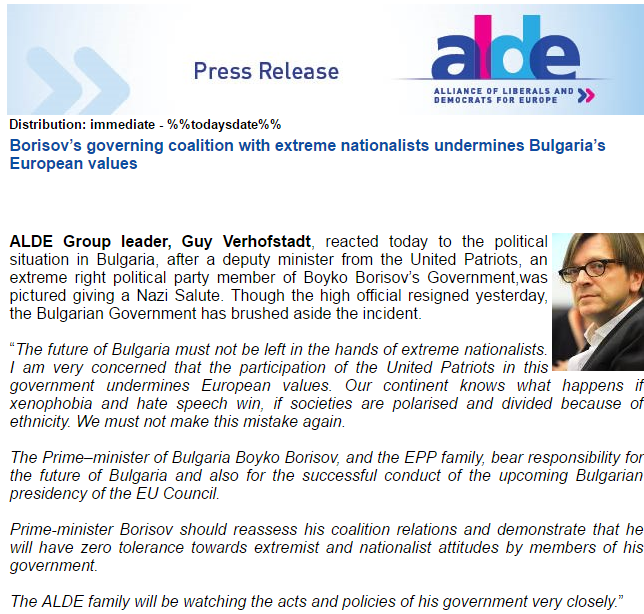 ALDE Group leader, Guy Verhofstadt, reacted on the political situation in Bulgaria, where United Patriots, an extreme right political party member of Boyko Borisov’s Government, shocked the public opinion when one of their deputy ministers appeared in a picture giving a Nazi Salute. Though the high official resigned, the Bulgarian Government minimalized the incident.

“The future of Bulgaria must not be in the hands of extreme nationalists. I am very concerned that the participation of the United Patriots in government puts in question the values on which the country pledged when joining the EU. Europe already experienced what happens if xenophobia and hate speech win, if societies are polarised and divided because of ethnicity. We must not make this mistake again.

Prime–minister of Bulgaria Boyko Borisov, and with him the EPP family, bear the responsibility for the future of Bulgaria and also for successful conduct of the upcoming Bulgarian presidency of the EU Council.

Prime-minister Borisov should reassess his coalition relations and demonstrate that he will have zero tolerance towards extremist and nationalist attitudes by members of his government.

The ALDE family will be watching the acts and policies of his government very closely.”